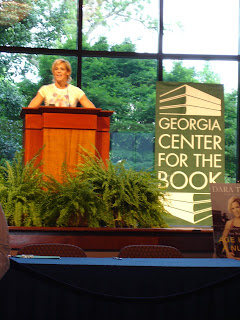 Dara Torres was one of a handful of athletes who had my full attention during the 2008 Beijing Summer Olympics. A lot of my focus stayed on Michael Phelps, but I found Dara Torres to be the most inspiring Olympic athlete. She’s won 12 Olympic medals, including four golds, in her five Olympic appearances. She’s set three world records. She was 41 years old at the Beijing Olympics and hasn’t ruled out the possibility of competing in the London Summer Olympics in 2012. I really hope she does.

Last night I attended her lecture at the Jimmy Carter Presidential Library and Museum where she promoted her new book, Age Is Just a Number. Atlanta was the last stop on her book tour before she heads home for two months of intense training. She’s trying to make the USA team and compete at the World Championships in Rome later this summer.

Torres spoke briefly about how the writing of her book came about. She said she wanted to write about all aspects of her life, the good and bad, the ups and downs. She wanted to share what she’s learned from her life lessons.

Most of Torres’ time was spent answering questions from the audience. Of these, a large number of them were from little girls who already are or who want to be swimmers. She offered them advice and encouraged them to take swimming lessons, work hard, and be goal-oriented. One little girl asked Torres how she got rid of nervousness before a race. Her response was that she can’t. She was just as nervous at her most recent Olympics as she was at her first in 1984.

I recently read Michael Phelps’ book, No Limits: The Will to Succeed. One of the things that he hoped would come out of the 2008 Beijing Olympics was increased awareness and interest in swimming in the United States. I think that has happened. Though Phelps’ performance was unparalleled, I think that Torres is also greatly responsible for making swimming a better and more popular sport. I can’t wait to read the book.
Posted by Betsy at 10:56 AM No comments:

The stories of Edgar Allan Poe were wasted on me much earlier in my life (maybe even 20 years ago), when I attempted to read a short story collection. I got nothing out of it. So far, I haven’t given the author another shot. He never ended up on any of my syllabi in all those years of English literature courses. Today, however, I have a renewed interest in Poe and his scary tales.

To celebrate the bicentennial of the horror writer’s birth in Boston, the city is dedicating a square in his honor today. Earlier this year, Boston Mayor Thomas Menino named January Edgar Allan Poe Appreciation Month. Poe has connections to several other cities including New York City, Baltimore, Philadelphia, and Richmond, Va., and the South Carolina Low Country. For the full story on his square in Boston, visit http://www.boston.com/news/local/breaking_news/2009/04/square_named_fo.html?s_campaign=8315.

In Georgia, the Forsyth County Public Library system and Forsyth Reads Together have chosen to celebrate and encourage the reading of Great Tales and Poems of Edgar Allan Poe through July 13. Special planned activities between now and then include movie nights, book discussions, and a magician’s appearance. If you want to know more, visit http://www.forsyth.public.lib.ga.us/.

All of this seems like as good a reason as any to revisit Poe.
Posted by Betsy at 11:01 AM No comments:

I’ve mentioned before that my grandmother is one of the people in my life who is directly responsible for making me so interested in reading. In 2004, she and I joined a tour group and spent 10 days in northern and central Italy. Venice was my favorite stop. I took three rolls of film in one day there (I converted to digital in 2007). I’d love to upload photos of Venice, but I’ll have to get them scanned in first.

My grandmother’s favorite genre is the mystery, and I read very few of them. But at her recommendation, I’m planning to read Donna Leon’s series of crime novels set in Venice. I’m on the waiting list at the library for the first one, Death at La Fenice. However, I attended her lecture at the Margaret Mitchell House promoting her most recent publication from the Guido Brunetti series, About Face.

I had a slight concern that I might be missing out by not having read any of the books yet. Lucky for me, I was wrong. I had almost forgotten how much I enjoy listening to an author talk about how her book came about. It’s been a while since I’ve been to an author lecture (I so miss attending events at Raleigh’s Quail Ridge Books!). One of the best things Leon said was that an important character in her most recent release originated from a woman Leon stood next to in Munich for approximately three seconds. The idea of that woman becoming a character in her book kept following her around until Leon built the book around her. To know more about this intriguing character, I have to read 17 books before About Face. I guess I better get busy!

Leon also talked a lot about being an outsider in Venice (she has been a permanent resident for over 25 years), and the three issues that are Italy’s biggest problems: its government, the mafia, and garbage. The last of these plays a central role in About Face.
Posted by Betsy at 6:33 PM No comments:

Gone With the Wind 70th Anniversary

I read the book and saw the movie for the first time when I was 14, and I’ve seen the movie countless times since. I’ve visited the Margaret Mitchell House and Museum in Midtown Atlanta twice. I also have every one of Hallmark’s Scarlett O’Hara Christmas ornaments since 1997, and quite a few of the Rhetts. At some point I will be able to let my Gone With the Wind ornaments have their own Christmas tree. So I’m sure you can imagine my shock when my then-fiancé, just a few months before our move to Atlanta, told me he’d never seen the film. Well, I fixed that problem.

To put the impact of the movie in perspective, it debuted in 1939 in Technicolor, and was one of the few movies to appear in color. The same year, The Wizard of Oz also premiered, and 1939 is considered by some to be Hollywood’s greatest year. Gone With the Wind won eight Oscars, including Best Actress in a Leading Role (Vivien Leigh – Scarlett) and Best Actress in a Supporting Role (Hattie McDaniel – Mammy). McDaniel was the first African-American to be nominated for and win an Academy Award.

There was a weekend-long celebration in Atlanta (April 17-19) to commemorate the movie’s debut, and my husband went to see it on the big screen with me at the Fox Theatre in Midtown.

Labels: Gone With the Wind

I’ve always been a reader. My parents read books to me all the time as a child (favorites include Where the Wild Things Are, Morris and the Disappearing Bag, and anything by Robert McCloskey). My maternal grandmother was a librarian and a children’s literature professor, and she gave me books for birthdays and Christmases (she still does). Later, she’d ask me about them. So from an early age, I got used to reading a book and reporting on it.

I majored in English twice. At Meredith College, I attended lectures by Seamus Heaney, Lucille Clifton, and others. I started going to see authors at Quail Ridge Books in Raleigh, NC, and saw Amy Tan, Kaye Gibbons, and others. I had to memorize the prologue to The Canterbury Tales in Middle English. I wore a crown to read the part of Titania in A Midsummer Night’s Dream in my Shakespeare course. I delved into the books and biographical information of countless American, Irish, and British writers. My two favorites were Harper Lee and Willa Cather.

My second English degree is from NC State University. Here, I still focused on British and American literatures, but my interests shifted when I took a course called simply, The Memoir. We read what writers wrote about their writing and their lives, and it sucked me in. I followed that up with a creative nonfiction class and I began to focus on the memoir, autobiography, and oral history. I strayed from a traditional literature thesis and wrote my great-grandmother’s biography. It was the most fun project I’ve ever done.

Now, three years later, I’m living in Atlanta, having moved here after my wedding in 2007. During that first summer I was unemployed and didn’t know many people, so I read. I read so much that I added the book titles to a list when I finished each one. Even now that I’m working, I’m still reading an average of one book a week, and adding it to the bottom of that list. As of today, there are 110 books on that list, just shy of two years after I started it.

Now that I am out of school and free to read whatever I want, I still read memoir and autobiography, bestselling fiction and nonfiction, many things recommended to me by others, and yes, even chick lit. I watch movies that correspond with books, but I always read the books first. I get suckered into mega-bestselling series like Harry Potter (but I won’t watch the movies) and Twilight (I might watch the movies).

Just because I’m no longer in school doesn’t mean I don’t reflect on all I take in. I still think about one book in relation to another, and compare an author's early works to later ones. So consider this my new English paper in a format that works for me. I will talk about what I’m reading, where I’m going, and what I’m watching, all with regard to literature. I’m taking advantage of being a Metro Atlanta resident, where literary events abound, and there are several interstates to take me all over the Southeast as I do some literary traveling.

Keep reading and enjoy.
Posted by Betsy at 6:43 AM 1 comment: