"Mrs. Hammond told me that God made my hair red on purpose and I've never cared for him since."

I recently finished listening to Lucy Maud Montgomery's Anne of Green Gables on my iPod (thanks to Librivox and Annie, the reader, who did a great job). It's been years since I've read the book, and I enjoyed it just as much this time, I think, as I did any other time. I think I got the book in my Easter basket when I was in fourth or fifth grade, and bought all the other books in the series later, as well as nearly everything else Montgomery wrote. And, I've seen episodes of the PBS series more times than I can count. If I know it's on, I'll watch it.

In 2006 I was on a family vacation cruising through Eastern Canada and New England. One of our stops was in Prince Edward Island, and I think it's every bit as beautiful as Montgomery described in all her books. One of the excursions the day we stopped in PEI was to visit the home that inspired Green Gables, a farm that was owned during Montgomery's life by some of her relatives. You can learn more about his house by clicking here for a virtual tour.

I took some pictures of the house during my visit, but that was when I used film. If I can get them scanned in, I promise to upload them.

Late last year I read an article somewhere that another book, intended to be the last of the series was found by a relative of Montgomery in some of her papers. The last I heard, the family was planning to publish this book, which, reportedly, was darker and tackled subject matter different from the rest of the series. I've kept my ear to the ground for more, but haven't heard anything. If you know something about this, please leave a comment for me!

I think I've decided to reread the rest of the series, and have downloaded three more Anne books to my iPod. It's such fun to reread things from childhood!
Posted by Betsy at 9:01 AM No comments:

I recently attended my second new book club meeting with a group of women who have met monthly for a few years. They have great taste in books and are reading many of the things I've either just read or plan to soon, so I decided to join up with them.

Last week I attended my first meeting where we discussed Jamie Ford's Hotel on the Corner of Bitter and Sweet. I had picked up the paperback a few months ago when I was visiting my favorite bookstore, Quail Ridge Books. It caught my eye as the setting is Seattle, one of the two places my husband and I visited on our honeymoon.

Hotel is a beautifully layered love story, told from two time periods 40 years apart. It tells readers a lot about Seattle in the 1940s, evacuation of Japanese Americans during World War II to camps, tensions between the Chinese and Japanese around the same time and how different generations can struggle to identify themselves ethnically. Four things I didn't know too much about before reading. This is one of the best books I've read all year.

Here's what the Book Lady had to say about it a few months ago. She's on my regular blog-reading rotation. Here's a link to the Author Jamie Ford's home page. I can't wait for him to write something else for me to read.
Posted by Betsy at 12:35 PM No comments:

Recently, when passing through Augusta, Georgia, via I-20, I stopped to scope out something I've read about in a book I have called A Guide to Literary Sites of the South by Ella Robinson. In it, I learned that four poets with ties to Georgia are honored with a monument in the downtown area in the 700 block of Greene Street. The four honorees are Sidney Lanier, Father Abram Ryan, James R. Randall and Paul Hamilton Hayne. 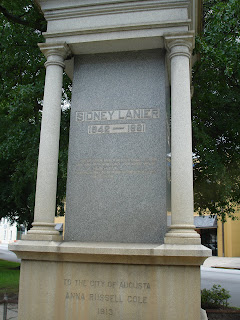 Lanier (1842-1881), a native of Macon, was ahead of his time in that he believed the South should be less reliant on cotton, and he was a lover of the arts. I mentioned Lanier in a post I wrote in January after a trip to Asheville, NC, where I visited the Richmond Hill Inn, a place connected to Lanier (to refresh your memory on this, click here). Lanier's birthplace home is still standing in Macon and is open to the public for tours. I intend to get down there to check it out sometime this year. I can't find any information on Lanier's connection to Augusta, however. 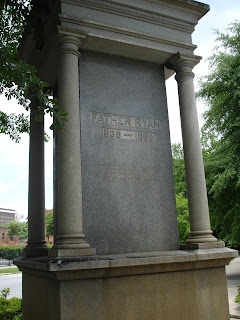 Ryan (1838-1886) is nicknamed "the poet of the Confederacy" and "the poet of the lost cause." He intended to be commissioned as a military chaplain for the Confederate Army, but wasn't accepted. Instead, he came along anyway and ministered to sick and wounded soldiers and edited a publication in New Orleans. He wrote two poems as a tribute to his brother, a soldier killed in action. Other poems followed. He later lived and worked in Augusta and edited more periodicals. 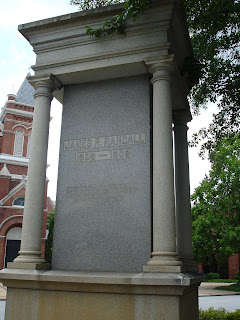 Randall (1839-1908) wrote mostly historical poetry, including what's referred to as the "unofficial anthem of the Confederacy," "Maryland, My Maryland." After the Civil War ended, he became a newspaper editor in Augusta. 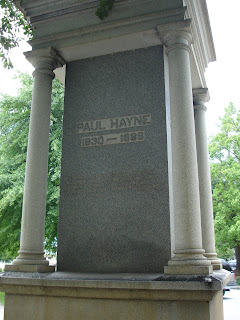 Hayne (1830-1886) was called "Poet Laureate of the South" during his day. After the Civil War ended, he moved to Augusta and edited a newspaper for only three months.
There is very, very little information available about this monument and how it came about. The biggest article I've found through Google searching is here.
Posted by Betsy at 11:34 AM 2 comments:

I'm in a new book club that I'm very excited about. This week we had our first meeting to talk over Suzanne Collins' first book in her trilogy, The Hunger Games. The book's target audience is young adult readers, and since I knew it was going to be nothing like Harry Potter, I hesitated a bit through the first few pages. However, before I realized it, I was hooked, turning pages as fast as I could. It's nothing like the things I'm usually reading, but it brought up all kinds of things in my head comparing the satirical world of Panem to the modern-day U.S. and all the things that we think of as "normal."

I knew nothing about this book or series before I began reading, and now I know I'll have to check out Collins' second book of the trilogy, Catching Fire, before the third book, Mockingjay, comes out in 74 days (it's what the website says).

I'm thinking this book club is going to be right up my alley. First, they suck me in with a book like The Hunger Games. Then they declare the next book to be Wuthering Heights. Sold.
Posted by Betsy at 11:22 AM No comments:

I've always preferred to watch football, basketball and baseball, and have never had much interest in watching soccer until coincidentally, three things happened nearly at once: my husband joined an indoor soccer team and is playing once a week, the FIFA World Cup is just days away from starting in South Africa and I've just finished listening to the audiobook of Warren St. John's Outcasts United: An American Town, a Refugee Team and One Woman's Quest to Make a Difference. Initially, what drew me to the request the book from my library was that the story takes place in another Atlanta suburb not so far from where I live, but much different.

The story hooked me right away. What fascinated me most about this book is its setting, Clarkston, and how so many cultures have descended upon this little town, and all of the boys who played soccer for their very strict coach, Luma Mufleh. I'd recommend this book to everyone. I think this book resonates with people for all kinds of reasons, but in light of Memorial Day and upcoming July 4th, I can't think of any book that better illustrates the complexities of American life for those who have lived here their whole lives, and those who come here to escape religious and political persecution, war, famine and other tragedies. I'm even going to see if I can get my husband to read it.

To read more about all of this soccer stuff, check out: