I've always been interested in Great Britain's royal family. As a child I had Princess Diana paper dolls. I watched Andrew and Fergie's wedding on a small black and white television with my grandmother at her kitchen table over ice cream. I remember exactly where I was when I heard that Diana had been killed in a car crash in Paris. I obsessed over William and Kate's wedding last year and watched everything I could this summer during Queen Elizabeth's Diamond Jubilee celebrations. By the time I watched Jubilee festivities and the Summer Olympics in London, I already had a return trip planned to visit London just as I did two years ago.

Two weeks before the trip my turn came up to borrow Sally Bedell Smith's Elizabeth the Queen: The Life of a Modern Monarch, and I read it in breaks in the festivities of my sister's wedding at the beach. Then, in a wonderful stroke of luck, my travel companion Melyssa won an advanced reading copy of Mrs. Queen Takes the Train by William Kuhn, which she read and then I did the same just before the trip. I was all fascinated by the idea of a fictional account of what Queen Elizabeth is like, so I reread The Uncommon Reader by Alan Bennett for good measure. Reading these three books in this order was definitely the right thing to do to feel ready for London.

Then, on our second day in London I was beyond excited that we'd been able to get tickets to see the Staterooms at Buckingham Palace on the last day of summer opening. We didn't realize to get to Buckingham Palace we'd have a marathon going on between where we got off the Tube and the entrance to the Palace, so after dodging across the street in front of the Palace and in front of some surprised runners, we made it.

Buckingham Palace was for me the highlight in a week full of amazing, wonderful sights. 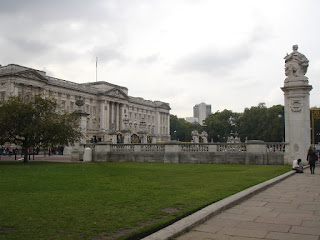 And, it meant more having just read a comprehensive biography and two fiction books about The Queen.

Elizabeth the Queen: The Life of a Modern Monarch revealed her personality. Since the book outlines the moments when she slips out of her Queen position for a minute and is a regular person, reading two fictional books where she is easy to relate to wasn't a stretch to imagine. She is reported to have stared out the window of her Buckingham Palace home growing up, watching people pass by and wondering about them; then as queen she traveled so extensively that surely she got to know all about the regular people not just in her kingdom but around the world. I learned a few other interesting tidbits in the biography too. For example, The Queen Mother fished in pearls, The Queen's handbag usually contains reading glasses, mints, pens and cash for offering plate, and The Queen reapplies her lipstick at the table after a meal (so I can too, right?).

When I started reading Mrs. Queen Takes the Train I loved that The Queen just decided to head out into the world outside the Buckingham Palace gates unattended. Kuhn wrote the book in such a way that what I know about The Queen from reading the biography played directly into The Queen who appears in his book. The two pictures of The Queen and her personality went together well. Later in Mrs. Queen Takes the Train when The Queen is on the train headed for Scotland she warms up to the passengers sitting near her and has a great time socializing with them.

What made visiting Buckingham Palace extra fun after having read Mrs. Queen Takes the Train is that the visit included the Mews, or stables, which house the royal coaches and horses. It's a living, working part of the palace that's on display, and this part of the palace has an important part in the story Kuhn created. 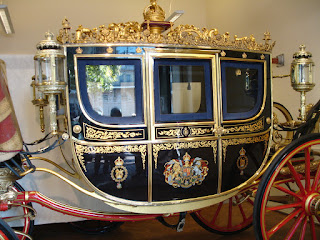 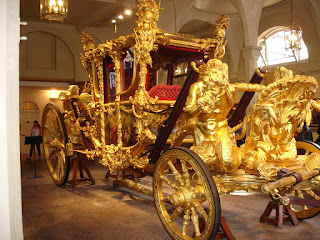 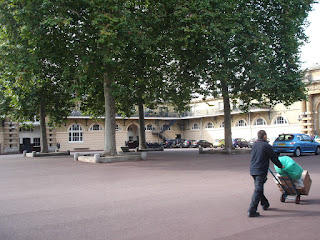 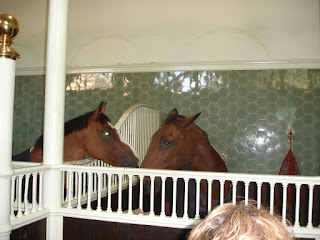 Both Mrs. Queen Takes the Train and Elizabeth the Queen: The Life of a Modern Monarch come highly recommended by me, whether or not you're planning a visit to Buckingham Palace.


*By the way, it's dangerous to go on a trip with a fellow bookworm. I bought 13 books in London and getting them back in my suitcase and carry on was a challenge. However, I'm excited to start reading all of them and write about them here, just as I have from previous trips.