I love how an idea from one book can lead me down a path exploring a certain theme, author, time period, etc. What I sometimes love even more is how I can accidentally pick books with common themes that I discover somewhere in the middle of the second such book. In the past couple of weeks, I've read three books where speech and language are at the forefront: Bel Canto (P.S.)

by Ann Patchett, The Sparrow

by Mary Doria Russell and The King's Speech: How One Man Saved the British Monarchy

by Mark Logue and Peter Conradi.

, turns out to be one of the best books I've read so far in 2011, and it was a book I had not heard of other than its mention on NPR's list of Best Beach Books Ever, so I put it on my to-read list. In it, party guests are held hostage at the home of a vice president of a South American country. Most of the women are soon released, except for Roxanne Coss, an American opera singer known throughout the world. Those who remain are held so long that they have the chance to form meaningful relationships and bridge the gap between gender, ethnic, social and cultural differences. The most important part of what the hostages and their captors learn from each other, in my opinion, was to speak each others' languages. This book was so powerful that I cannot imagine how I have gone this far in my life before reading any of Patchett's work. Now all the rest of her novels are on my to-read list too. This summer Patchett visited Oxford, Mississippi's independent bookstore, Square Books. A podcast of her visit is featured on the store's blog.

My book club chose to read The Sparrow

for our September meeting, which was last night. This is one of those books I probably never would have chosen to read on my own. One of the things I love about book club is branching out and reading things like this. It's a science fiction, futuristic book about a group of Jesuit anthropologists who find life on an asteroid and visit to learn about its people. The book is full of memorable, fantastic characters, and I became attached to most of them as I read. One of the main characters is Emilio, a Jesuit priest and linguist. When his group of earthlings encounters those living on Rakhat for the first time, he is the one who steps forward to speak to them for the first time and begins to understand their language. Russell wrote a sequel to this book called Children of God (Ballantine Reader's Circle). I hope to be reading that one soon while all the details from The Sparrow are still fresh in my head.

The third book is related to the Oscar-winning movie, which I saw in the theaters and absolutely loved (I almost never go to the movies. I wait and watch everything on Netflix. Based on what's going on there, that may soon change!). I usually read the book before I see the corresponding movie, and 95% of the time the book is better. I have to say I was disappointed in this book. As it turns out, the book was written by King George VI's speech therapist's grandson, who began researching their relationship out of curiosity after the movie was already in production. I didn't think the book was particularly well-written, as this is a topic that I'm all over and frankly, I was bored in places. I did like that it expanded upon the relationship between the king and his coach in places where the movie couldn't. The movie built up to King George's speech to the British people when Great Britain entered World War II. As the book explains, the king's relationship with Logue lasted for years, and Logue was called upon to help the king with many, many speeches. If you're particularly interested in this, read the book; otherwise, just watch the movie again.

The next couple of books I'm planning to read will also deal with language but in a slightly different way. A post on that will be coming soon.
Posted by Betsy at 6:51 AM No comments:

This weekend I spent two days at the Write Choice Services booth during the Decatur Book Festival having lots of fun. On Saturday, WCS owner Tim Morrison broadcast his Internet radio show, Write Here Write Now, all day interviewing authors in 15-minute slots. The rest of us talked with the new authors, seasoned authors, book business professionals and avid readers that stopped by the booth over the two days.

Besides chatting about the books our visitors had written or plan to write one day, we sold several of Tim's fourth and latest book, Writing Secrets: Essential Steps to Discover How to Start. I've recently read the book for myself and I like that it assumes one knows s/he has a book to write but doesn't yet know what to write about. It suggests ways to narrow in on that topic and begin writing. 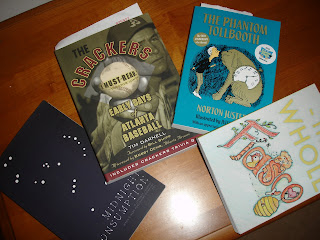 Things were so busy at our table that I didn't attend any author events, but I did manage to pick up some new reading material.

First, I attended the book launch party for The Whole Fiasco, the compilation of tall tales written by fifth and sixth graders at KIPP Strive Academy in Atlanta (the program is in partnership with The Wren's Nest, the home of Joel Chandler Harris, in West End). Two students did a reading and all of the students autographed books. Such fun! Though I'm familiar with many of the stories I'm still looking forward to reading them all again.

The Wren's Nest was selling its other book as well. Midnight Consumption is the literary journal produced this year by high schoolers.

From the Emerging Writers tent at the Festival, I picked up The Crackers: Early Days of Atlanta Baseball by Tim Darnell. Maybe I'll read it during the playoffs.

And, finally, I'll pretend to be a Decatur resident as I participate in Decatur's 2011 On the Same Page program by reading The Phantom Tollbooth by Norton Juster. I haven't read this book since elementary school and I'm so excited to read it again. Several events are part of this program.

I'm glad that this year instead of hearing about the largest independent book festival in the nation second-hand, I experienced it for myself. I'm already looking forward to next year's.
Posted by Betsy at 12:49 PM 2 comments:

The fall issue of Georgia Connector Magazine is out, and my story on alpaca farms in Northeast Georgia is included. I had such fun talking to the farmers and meeting all their animals.
Posted by Betsy at 1:07 PM No comments:

I missed the Atlanta Better World Books Book Club meeting Thursday night because I underestimated the time I'd need on a project for a client. I hated to miss. The next morning I looked at BWB's Facebook pictures where everyone looks to be having so much fun. Then I read their blog post about the event and then I knew for sure they'd had fun without me. Oh, well. I'm hoping to participate in next month's online book club for one of my top five books from 2010, The Help

I read this month's book club selection, The Blue Sweater

by Jacqueline Novograntz, and it was interesting and made me think a lot. However, there was a lot more I wanted to know about Novograntz's childhood and adolescence. What steered her toward philanthropy and microeconomics? We got glimpses of this but nothing concrete enough for me. Also, I have to admit I grew frustrated each time I read that Novograntz went out jogging again and again alone. When that's something I'm very careful about in the American suburbs, it was hard for me to grasp why she kept going out alone. I felt so sorry for her, though, when she did relate her experience being mugged in broad daylight while others were close by. Also, I liked that that didn't break her spirit and wasn't enough to send her packing back to the safety of the United States.

Much of the book focused on Novograntz's early experiences with philanthropy in African and Asian countries and the challenges she faced as a young, white American only beginning to understand the cultures of these other places. Then there was a big jump to her present life as the founder and CEO of her nonprofit organization, Acumen Fund. I imagine there were some experiences in the middle part of her career that steered and molded her. What were they? I hope she'll write another book and tell us all about it.
Posted by Betsy at 1:18 PM No comments: