The Gift of Reading from My Grandmother

I’ve talked quite a bit about my paternal grandmother, Dot, here, here and here in this blog. I can credit her more than anyone else with developing my love for books and reading. Over the years we’ve discussed book after book after book that we’ve both read.

She was diagnosed in September 2007 at age 82 with breast cancer and decided to fight it. She was the oldest patient her oncologist had ever had. She was a yellow dog democrat, and told her oncologist during one of their initial meetings that he needed to keep her alive long enough to see a democrat in the White House. He did. She managed to live with the breast cancer through both good days and bad days for more than two years. A year ago, she even felt good enough to have my father drive her from Greensboro, NC, to Atlanta to visit me for the weekend.
She was diagnosed with lung cancer on Tuesday, October 20 and died peacefully on Saturday, October 24. Even the day before she died we were talking Flannery O’Connor and looking through my Savannah pictures in her hospital room. She loved hearing about all the literary trips I’ve been taking this year, and she was thrilled that I was three weeks away from visiting Rowan Oak. If she had lived until I had gotten back from that trip, no doubt she would have wanted all the details and to have a look at the pictures.
The real kicker to all of this is that my maternal grandfather passed away less than four weeks before my grandmother, so my family had experienced two deaths almost at the same time. Though their children, my parents, married in 1974, my four grandparents had been close friends for years before that, and it was an added bonus to have their children marry each other. My grandfather and grandmother lived their last months on the same hall of an assisted living facility and died in hospital rooms next door to each other. Here is a picture of me with these two grandparents on my third birthday in 1981: 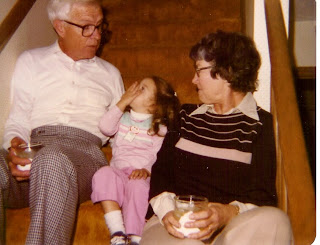 I have many, many pictures of me at all ages with all my grandparents, but for the purposes of this blog, here is one of my favorites with Dot on our Italy trip. We’re in Juliet’s Garden in Verona with her statue. That year it was my Christmas card photo. 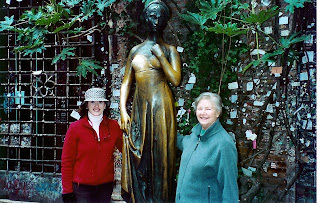 For lack of a better place to mention this, and while I’m on the topic of the Italy trip, while we were in Rome, I visited the Keats-Shelley House just to the right of the Spanish Steps (my grandmother checked out the Steps instead while I went in the House). Here are a couple of photos from that, and here is an excerpt from my travel journal from that day (March 10, 2004):
“After lunch we visited the famous Spanish Steps and had some time on our own. I broke away from the rest of my group members to visit the Keats-Shelley House, a small museum dedicated to the British and American poets, novelists and artists of the Romantic period who spend time in Rome during the first half of the 19th century. I actually stood in the room where Keats died from consumption at the young age of 26. It was thrilling!” 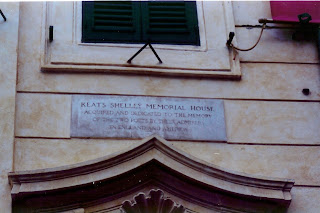 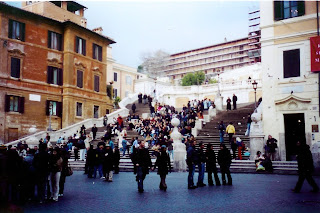 So my excuse for nearly abandoning my blog for the month of October is, I hope, warranted. I have a lot in store for the blog in the next few months, so please keep reading.
Posted by Betsy at 6:37 AM No comments:

A Visit to Faulkner's Oxford

"...I discovered that my own little postage stamp of native soil was worth writing about and that I would never live long enough to exhaust it..." - William Faulkner (1958)
The trip to Oxford and Tupelo, Mississippi, was a success. My husband and I had a lot of fun exploring these two towns.
Rowan Oak was fascinating, of course. I enjoyed the peaceful setting and seeing the house very much as it was when Faulkner was living there and writing prize-winning literature. My one (small) disappointment was that there was no gift shop. When I visit important literary sites, I love to come home with a small memento. This time, I'll just have to settle for the pictures. 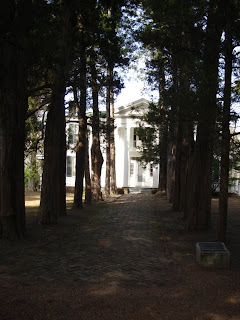 Rowan Oak from the front walk. 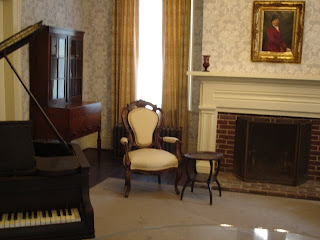 The front parlor of the home. Faulkner's funeral was held here. 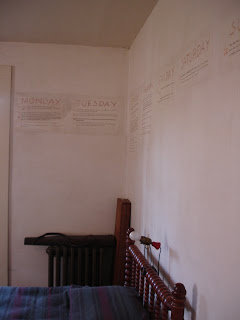 Faulkner's office. Notice the outlining he wrote directly on the walls! 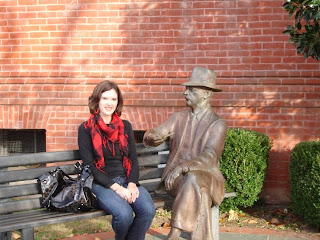 The Faulkner statue in front of City Hall in Oxford.

I've visited Elvis Presley's birthplace in Tupelo once before, but while I was there, I had to go by again. Here are two photos of the historic site. 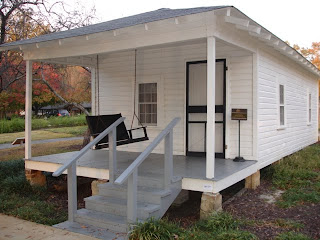 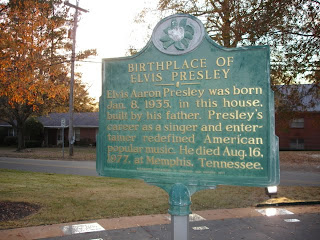 Rereading a Classic: As I Lay Dying

I love to read things that correlate with places I've just been or am about to go. I'm so thrilled about this weekend when I'll be visiting Oxford, Mississippi, that I decided I better reread some Faulkner. The highlight of my weekend, of course, will be a visit to Rowan Oak, Faulkner's home. The highlight of my husband's weekend will be watching his Tennessee Vols take on Ole Miss.

My first exposure to William Faulkner happened at a time in my life when I needed reassurance that I had made the right decision. I was a sophomore in college and had a terrible time choosing a major because I just wasn't sure what I wanted to be when I grew up. Over Christmas break I decided on English because I'd always liked the courses and teachers, and had always done well in the classes. I was under the gun, maybe the last of my friends to declare her major. I picked it because I knew I'd enjoy it and decided to figure out a specific career path later. As it turns out, I loved majoring in English so much that I did it again in graduate school and I love my job as a freelance writer/editor. And, would I be writing a blog if I had majored in psychology, speech communication or fashion merchandising? Probably not. Or at least not quite like this. So, see, it has turned out well.

But when I came back from Christmas break my sophomore year, I rearranged my class schedule to drop classes from a discarded major and add two English courses: Survey of British Literature and Survey of American Literature.

I knew American literature would be my all-time favorite when I read my first Anne Bradstreet poem. I just didn't know how much I would love American lit until a few weeks later when the class began reading Faulkner's As I Lay Dying. Really, I think this novel is responsible for a lot of things where I am concerned, so here I am, 10 and a half years later, rereading it.

There is something about reading a book for the first time and loving it, but it is something else entirely when you revisit it after a long time and the plot and characters come back to you and it feels so familiar.

Check back later for more on my visit to Oxford.
Posted by Betsy at 5:23 PM No comments: