I watched Sen. Ted Kennedy’s funeral on Saturday and watched the last episode of HBO’s John Adams miniseries last night. Interestingly, I found a correlation between the two. While I watched Kennedy’s funeral, I was reminded of the friendship between Thomas Jefferson and John Adams, who were both political allies and rivals. Several of Sen. Kennedy’s eulogists spoke of the Senator working with Republicans closely to get things done.

At Kennedy’s wake at the John F. Kennedy Presidential Library in Boston, several speakers talked of Sen. Kennedy’s work with members of both parties. Utah Republican Orrin Hatch said that Kennedy had a “strong working relationship with and love for the man I came to fight.”

Arizona senator and 2008 presidential candidate John McCain said Kennedy “was the most reliable, the most prepared and the most persistent member of the Senate. He also said that Kennedy “taught me to be a better senator.”

It seemed appropriate that last night when I watched the seventh episode of John Adams that it would spend so much time outlining the long friendship between Adams and Jefferson. Adams, the United States’ second president, and Jefferson, the third, sustained a friendship for over 51 years. They often had differing opinions on political topics, but they were still able to maintain a long-lasting relationship. They even died hours apart on July 4, 1826, 50 years to the day that they both signed the Declaration of Independence.

I highly recommend John Adams, both the miniseries and the book by David McCullough, which I read about a year ago. Both are extremely interesting. There was a lot about Adams that I did not know, and now I am so glad I know more. He was a pretty interesting guy.

For more on Sen. Kennedy’s funeral and wake, visit CCN.com.
Posted by Betsy at 3:30 PM No comments:

There are two upcoming book events in the Atlanta area worth checking out.

The Decatur Book Festival is September 4-6 on historic Decatur Square. Over 150 authors will read and sign books. For a full schedule of authors and activities (including food, wine, demonstrations and live music), visit the festival’s web site.

Sir Harold Evans will deliver the event’s keynote speech Friday, Sept. 4 at 8 p.m. at Presser Hall on the Agnes Scott College campus. To purchase tickets for the speech, visit the web site.

Mary Chapin Carpenter, Caroline Herring, Kate Campbell and Claire Holley will celebrate author Eudora Welty and the 100th anniversary of her birth with a performance Saturday, Sept. 5 at 8 p.m. in Presser Hall. Tickets to the event can be purchased by calling Agnes Scott College at 404-471-6430.

This weekend I went to see the film, Julie and Julia. I’ve been looking forward to seeing it for months. This spring, I listened to My Life in France, Julia Child’s autobiography, and read Julie and Julia: 365 Days, 524 Recipes, 1 Tiny Apartment Kitchen. My Life in France was nominated by a fellow book club member for our 2009 list, and we’ve now all read it. The book version of Julie and Julia was one of the things that really got me thinking about starting up a blog.

One of my favorite things about My Life in France was Julia’s husband, Paul. So often when I read a book and really take a liking to a particular character, I am disappointed in the casting later when I watch the movie version. I already believed Meryl Streep was up to the task of playing Julia after reading The Devil Wears Prada and then seeing Streep’s spot-on interpretation of Miranda Priestly, a role which won her an Academy Award nomination for Best Actress in 2007. I have to say, though, that I was nervous about Stanley Tucci, the actor who plays Paul Child (Note: Tucci also played in The Devil Wears Prada as Nigel, the fashion assistant.). I thought he was wonderfully supportive of his wife’s hobby-turned-profession, and he just seemed perfect for Julia. Now that I’ve seen Julie and Julia, I can’t imagine a more perfect Paul. He was just as I hoped he’d be!

I think Amy Adams was also wonderful in her role as Julie. She was a cleaner version of the Julie who wrote the book, and I liked both versions of Julie. In the movie, I particularly liked the portrayal of Julie’s office life, and what a wonderful release it was for her to go home from it every evening, crack open Mastering the Art of French Cooking, and make something wonderful.

Overall, I really thought the movie captured the best of both books and wove them seamlessly. Plus, the movie was just a lot of fun.
Posted by Betsy at 6:30 PM No comments:

The Devil in the White City (published in 2004) won the National Book Award, the Edgar Award for Best Fact Crime and was a number one national bestseller. I’ve heard rumors that a movie is in the works, and I’m hoping that’s true.

Burnham is the architect responsible for cleaning up Chicago in the late 1800s. He and his partner, John Root, were well-known Chicago architects who designed the buildings for the 1893 World’s Fair.

Dr. Holmes was a pharmacist, entrepreneur, con artist and serial killer who built a hotel for the World’s Far and was responsible for the disappearances of several hotel guests and other acquaintances before, during and after the Fair.

Devil in the White City weaves together the stories of these two men with relation to the anxiety, grandeur and excitement of the Chicago showcase.

I read the majority of this book on the plane to and from a wedding in Chicago last weekend. The book is completely fascinating. Though nothing else I did in Chicago was literature-related, I hope to return in the future to tour what’s available from past authors who wrote while living there such as Carl Sandburg, Ernest Hemingway, L. Frank Baum, Richard Wright, Harriet Monroe, Edna Ferber, Nelson Algren and Edgar Rice Burroughs.

Here are a few pictures from the weekend in the Windy City. 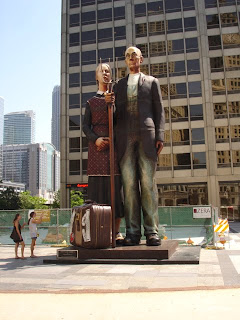 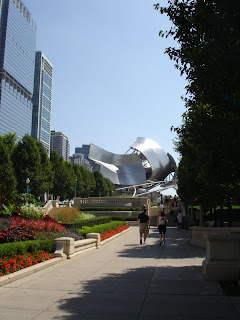 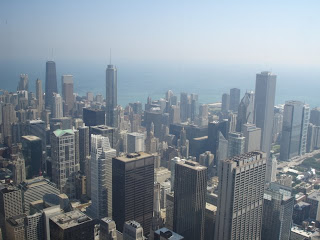 The view from the top of the Sears Tower 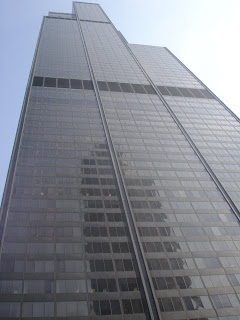 The view from the bottom of the Sears Tower 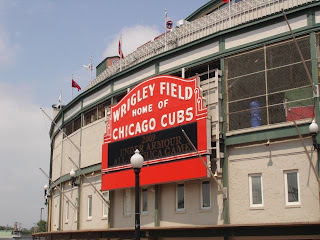 Wrigley Field, home of the Cubs

Several years ago, my grandmother and I spent 10 days in northern and central Italy with about 200 other Methodists from central and western North Carolinia. We had a wonderful time in a beautiful country that I want to revisit again someday. My grandmother is an avid reader like me, but she particularly enjoys mysteries, and I'm not that fond of them. I took her advice, though, and started reading Donna Leon's mystery series set in Venice. I just finished the first book, Death at La Fenice, and really enjoyed it. I'll be getting the second one in the series, Death in a Strange Country, from the library soon.

After I finished the book, I went looking for my photos from the trip. Here are a few of my favorites of Venice. Enjoy! 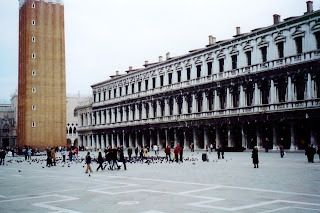 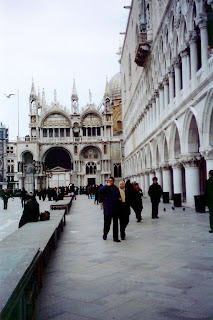 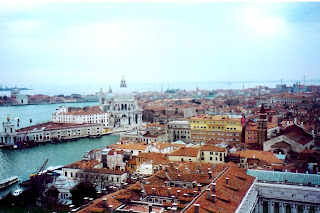 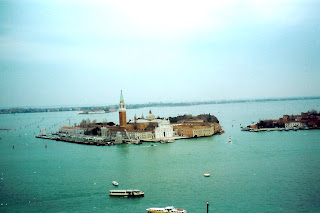 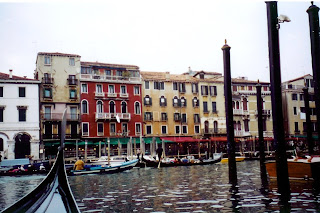 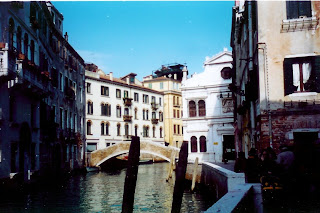