I finished Erik Larson's Thunderstruck last night. I really wanted to like it more. A few years ago I read his The Devil in the White City and absolutely loved it. Thunderstruck is structured much in the same way: two separate but related stories come together in a great way. For me, Thunderstruck attempted to do that but just didn't quite get there for me. The two main characters didn't coincide until way too close to the end. And, I was much more interested in the murder storyline than the science storyline. If Larson could have cut down the science part and lengthened the murder part I'd probably be completely happy with this book. Overall, though, I found it interesting and somewhat enjoyable.

One part that was especially fun for me is that some of the characters frequent a wonderful London restaurant where I've been for dinner an afternoon tea: the Criterion. It's in Picadilly Circus and is one of the most beautiful restaurants I've ever visited. Movies have been filmed there and many famous Londoners had a drink at the bar. In Thunderstruck, in the chapter titled "To the Ball," it says:

Built in 1873, the Criterion combined glamour and raffishness, especially its Long Bar, for men only, where a Scotland Yard inspector might find himself in amiable conversation with a former convict. In its dining rooms painters, writers, judges, and barristers gathered for lunch and dinner. Later, after the theaters of the Strand and Shaftesbury Avenue closed for the night, the city's population of actors, comedians, and magicians thronged the "Cri" and its bar and its Grand Hall and its East Room and West.

Taking a photo of the inside of the Criterion would have caused me to embarrass myself, but here is their website which contains photos of its interior.
Posted by betsy at 6:33 AM 1 comment:

I've just recently finished reading a book I'd been saving for once I'd returned from London and its palaces and other royal things. Becoming Queen Victoria: The Tragic Death of Princess Charlotte and the Unexpected Rise of Britain's Greatest Monarch by Kate Williams was a great read. In my obsession with all of Britain's royalty through the ages, Queen Victoria is right up on top with the current queen and Victoria's great-granddaughter. Partly because I took Victorian Literature in graduate school and it was heavy on the era's history (which was great) and partly because of all the reading I've done in the past few years, I feel like I have a good handle on Victoria's reign. What I didn't know as much about is how she got to that point. Only a very small part of this book actually takes place after Victoria has become queen. I was fascinated by her overbearing mother and her counterpart John Conroy, and the power they wanted to have over her, and the recognition and prestige they desired to have once Victoria became queen. I loved that even though she was only 18 when she became Britain's leader, she acted quickly and firmly to stand on her own. She knew she was capable of doing her duty without her mother and Conroy's influence, and she did so very well for the next 63 years. While the first half of the book focuses on Charlotte and is very interesting, I loved learning more about Victoria's early life and early reign in the second half of the book.

I've been lucky enough to visit Kensington Palace twice and Buckingham Palace once on my two trips to London. Here are a few photos. 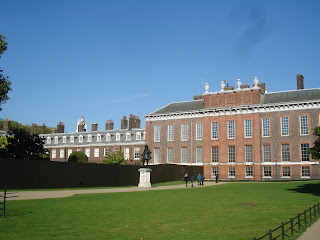 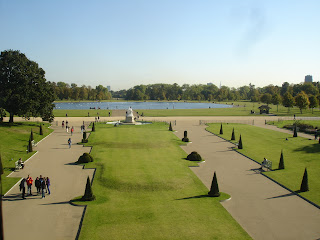 The lawn at Kensington Palace 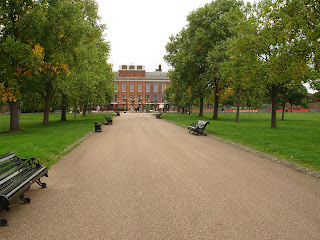 Kensington Palace from a distance 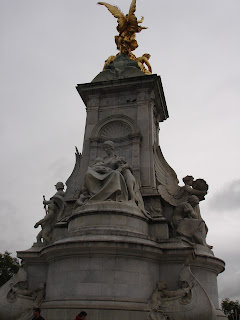 The Victoria and Albert Monument in front of Buckingham Palace 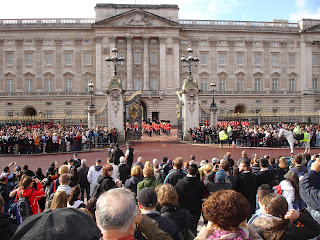 Buckingham Palace during the changing of the guard
Posted by betsy at 8:18 AM No comments:

My favorite bookstore in the whole world announced this week that it's for sale. Its owner, Nancy Olsen, who has run Quail Ridge Books for the past 28 years, has decided to retire. Practically as soon as the announcement was made I got emails and a post on my Facebook wall that generated comments about the fact that I should move back to Raleigh and buy it, or go in with a group to do so. My friends know me well! I love this store. In it I've bought scores of books, many of them signed by authors who have traveled there for an appearance. I attended readings there by Amy Tan, Kaye Gibbons, Fred Chappell and many, many others. Nearly every time I go home for a visit I have to stop by and browse the table of notable paperbacks just inside the front door. I can't seem to get out of there without purchasing at least one or two of them, sometimes more. The new owner of the store won't be me, but I hope it will be someone who can let the store remain very much as it has with its knowledgeable staff, cute gift wrap and wonderful author appearances. The community will just miss Quail Ridge too much if it's gone.

OK, so I'm a little behind with this, but last week's 2012 presidential election got me thinking about which books would be good to read during this time. Here are a few I'd recommend:

Letters to Jackie: Condolences from a Grieving Nation by Ellen Fitzpatrick
True Compass: A Memoir by Edward M. Kennedy
American Lion: Andrew Jackson in the White House by Jon Meacham
Spoken from the Heart by Laura Bush
Turning Point: A Candidate, a State, and a Nation Come of Age by Jimmy Carter

And here are a few I'd really like to read but haven't yet:

Harry Truman's Excellent Adventure: The True Story of a Great American Road Trip by Matthew Algeo
President Reagan: The Triumph of Imagination by Richard Reeves
Betsy Ross and the Making of America by Marla R. Miller
Everyday Icon: Michelle Obama and the Power of Style by Kate Betts
No Ordinary Time: Franklin and Eleanor Roosevelt: The Home Front in World War II by Doris Kearns Goodwin
The Presidents Club: Inside the World's Most Exclusive Fraternity by Nancy Gibbs
Reading Jackie: Her Autobiography in Books by William Kuhn
Mrs. Lincoln's Dressmaker by Jennifer Chiaverini
Team of Rivals: The Political Genius of Abraham Lincoln by Doris Kearns Goodwin
For Love of Politics: Bill and Hillary Clinton in the White House by Sally Bedell Smith
Posted by betsy at 5:10 PM No comments: