I’m a native North Carolinian, and I loved John Edwards and believe in many of the causes he believes in. I discounted the National Inquirer’s claim at first because I believed John Edwards was different from many of our politicians. When I found out the Inquirer was right, I was so disappointed in him.

I saw Elizabeth Edwards’ interview with Oprah and other media reports before I read her book, Resilience. John’s affair has been the subject of such interviews in light of Elizabeth’s new book. Eventually, I think people forget about the bad behaviors of people in the media spotlight. I wondered if America was just to the point of forgetting it happened when she brought it all back up and again focused attention on back to her husband’s infidelity. Then I started reading the book.

I thought John’s affair would take up more of the book that it did based on the attention the affair was again getting. Elizabeth didn’t start talking about the affair until page 169, and there are only 213 pages in the book. She spent many more pages talking about the grief she experienced in 1996 when their oldest child, Wade, was killed in a car accident. I had read Elizabeth’s first book, Saving Graces, when it came out two years ago. In it she talked in great detail about her first bout with cancer and Wade’s death. Based on her two books, I’d venture to say that Wade’s death has been the biggest roadblock in her life, bigger than her parents’ failing health, terminal cancer, or being betrayed by her spouse.

She wrote that she wasn’t as scared as she might have been when she was rediagnosed with terminal breast cancer that had spread to her bones. She said both, “it wasn’t as tough as Wade’s death, so I could do it,” and “death looks different to someone who has placed a child in the ground.”

So maybe her husband’s infidelity is not what she wants to focus on for whatever time she has left.
Posted by Betsy at 12:33 PM No comments:

Memorial Day is the first day of summer vacation for schoolchildren in Metro Atlanta, and the start of summer always makes me think ahead to what I’ll be reading this season. Several years ago, an English major friend and I began creating a summer reading list. Our reading group has grown and here are the 12 books we’re reading this season.

At my tour guide’s recommendation, I borrowed the A&E production Midnight in Savannah for a more balanced representation of the events described in John Berendt’s Midnight in the Garden of Good and Evil. Many Savannians were interviewed and weighed in on the spotlight put on Savannah after the alleged murder of Danny Hansford by Jim Williams. The documentary was released after the book’s publication and before the film came out.

The Savannanians who were interviewed seemed to agree to two things: that they don’t like change and they appreciate their privacy. Many of them look unfavorably on the tourism boom in their city that has resulted from Berendt’s book. One resident said it emphasizes the negative rather than the positive about Savannah. Another said that many of Savannah’s old families were upset with Berendt for writing the story and using his own creative license. Berendt, who was also interviewed by A&E said, “Savannah was shocked and mesmerized by [the murder],” and that his book is so compelling because the story is true.

Though some Savannians wish the tourists had never discovered their beautiful city, some residents are cashing in on all the visitors and publicity. As Historian John Duncan put it, “It’s easier to pick a Yankee tourist than a bale of cotton.”
Posted by Betsy at 4:48 AM No comments:

Rereading a Classic: The Great Gatsby

The National Endowment for the Arts has selected F. Scott Fitzgerald’s The Great Gatsby as one of its selections for the program, The Big Read. This inspired me to reread it earlier this week. I had forgotten how concise but dense the novel is, as I read it in one day at the beach, around time with friends and family, a jigsaw puzzle, and reading a magazine I picked up in Savannah last weekend.

This was my second time reading the 1925 classic, the first having been in 1995 for a high school English class. I remember pondering the question of Gatsby’s greatness then. I think I argued against it based on his failure to win Daisy Buchanan’s heart, and his tragic death. I think I can still agree with my earlier answer, but I have to say that I marvel at how well Gatsby had his partygoers and other West Egg residents convinced of his greatness. I know, though, that everything fell apart in the end. I can think of a few celebrities and politicians who have accomplished a similar feat, only to have it all come crashing down. I’m going to keep this in mind as I begin Elizabeth Edwards’ Resilience.
Posted by Betsy at 3:54 PM No comments:

“Anybody who has survived his childhood has enough information about life to last him the rest of his days.” – Flannery O’Connor

I discovered Flannery O’Connor my junior year of college when I took Seminar of American Women Writers, which turned out to be one of my all-time favorite classes. No one captures the South or paints characters in exactly the same way O’Connor does. I still laugh out load nearly every time the grandmother and June Star open their mouths in “A Good Man is Hard to Find.” I feel a little ashamed of myself for being amused at the Bible salesman in “Good Country People.” I’m still stunned at the end of “Everything that Rises Must Converge” when, well, I won’t ruin the end for you. Just go read it if you haven’t already.

I think many writers spend their whole careers extracting memories and small bits of information from their lives, and in particular, their childhoods. So it was simply a must that I visit the Flannery O’Connor Childhood Home on Lafayette Square in Savannah. 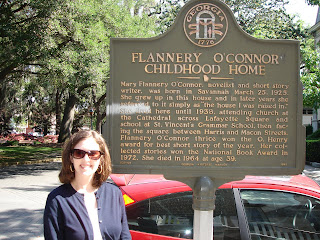 The tour includes two of the four floors of the house at 207 E. Charlton St. where O’Connor and her parents lived from 1925 to 1938. Most of the furniture was actually in the house while the O’Connors lived there. In the double parlor is the radio where O’Connor and her friends would gather on Saturday mornings to hear a radio show called, “Let’s Pretend.” I was not surprised to learn that she was such an imaginative child. 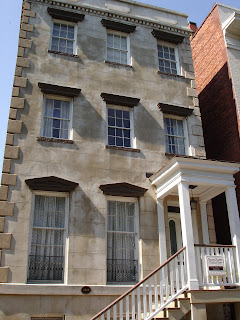 O’Connor really came to life for me while I walked through the house where she lived, played, and first began to create her own stories.

On the way back from Savannah, I began reading Brad Gooch’s new biography of O’Connor’s life, Flannery: A Life of Flannery O’Connor. So far, it’s excellent.

"The Book": Midnight in the Garden of Good and Evil 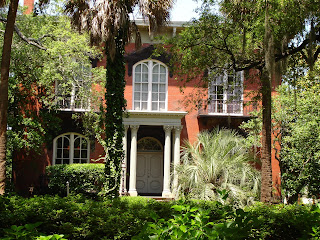 The Mercer-Williams House, the location of the murder in the book and movie.

A high-society murder. A drag queen. A New York journalist in the South. A gay millionaire/historic preservationist. Antiques. Any one of these in a story would make me want to read it. Put of all of these and more into one story and you’ve got Midnight in the Garden of Good and Evil. First, it was a nonfiction novel by John Berendt, but some say it’s somewhat embellished. Well, as Emily Dickinson said, “tell the truth, but tell it slant.” It’s about a murder in 1981 in Savannah, Georgia. The book version spent 216 weeks on the New York Times bestseller list. A movie was later produced starring Kevin Spacey and John Cusack.

I read the novel about a year ago and watched the movie recently in preparation for a trip to Savannah with my husband.

While in Savannah, we took a walking tour with a native Savannian who had been showing tourists around for 37 years. At the end of the tour, he was asked why he hadn’t mentioned anything about Midnight in the Garden of Good and Evil. He cleared his throat and diverted his eyes much like someone might who was just asked how much he paid for his vacation home or what kind of cosmetic surgery she’d just had done.

He said the movie was horrible and the book not much better. I hope my face did not reveal that I liked both. He recommended a show that A&E produced called Midnight in Savannah because it was a better representation of the real story. I’m planning to watch it. Next time I’m in Savannah I won’t mention to any of its residents that I know anything about “The Book.” I don’t want to seem impolite or unappreciative in the Hostess City of the South. 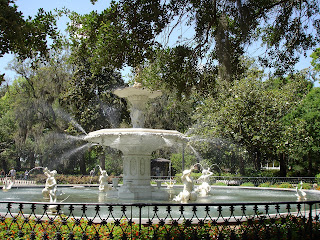 Forsyth Park, which appears in several scenes in the book and movie.
Posted by Betsy at 4:24 PM No comments: 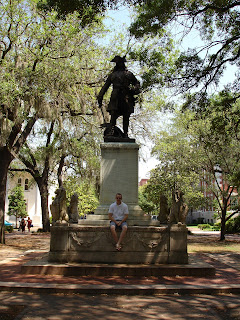 In the movie Forrest Gump (based on the book of the same title by Winston Groom), the title character spends time on a bench waiting for a bus, offering chocolate to strangers, complimenting a woman’s shoes, and sharing his life story before visiting Jenny, his childhood friend. Busses and passengers come and go while Forrest waits on this bench at Chippewa Square in Savannah, Georgia. Today, the bench has been removed, though the square has others. At the center of the square is a monument to General James Oglethorpe, the founder of the colony of Georgia in 1733.