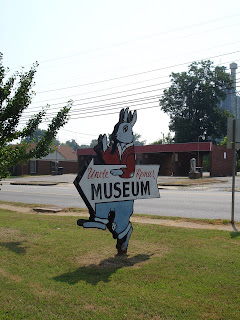 I recently visited the Joel Chandler Harris home in Atlanta knowing that the following weekend in Eatonton, Georgia, I’d visit the Uncle Remus Museum. It’s in two adjoining log cabins at Turner Park a few blocks south of downtown on the main drag. The cabin is representative of the cabin Harris visited often as a child on a nearby plantation. There he first heard the stories from the slaves that he later wrote down and published as the Uncle Remus tales. 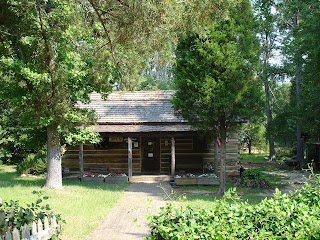 The museum charges $1 per adult for admission, and a docent knowledgeable about Harris’ childhood can give information and answer questions. The first room has a small gift shop area and prints from Disney’s movie interpretation of the stories, Song of the South. Also in the first room are carved wooden characters representing several of the well-known stories.

The second room is filled with household items from the Civil War era. They are labeled with what they are and in some cases, the name of the person who donated or loaned the item. The items are varied and include such things as old letters, a corncob pipe, a pair of children’s shoes and a carriage lantern. While these items are all interesting in their own right, what is obviously absent are the connections these items have with Harris’ childhood on the plantation. Clearly, many of the items were not used by Harris, though he likely would have used some like them. Are the items simply there to show what would have been available for use at a typical Georgia plantation home? Without helpful information posted visitors will never be sure.

If you must pick only one of the two Harris museums in Georgia, spend $8 and visit his home in Atlanta. The authenticity is what really impressed me. The detail that your tour guide will go into about Harris and his home and family is all extremely interesting and worth listening to. If you’d like a bit of plantation history and to see Civil War-era items, then stop in at the Uncle Remus Museum. 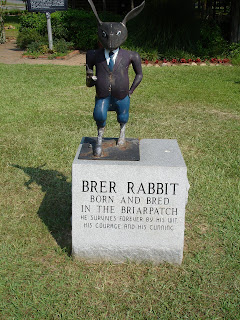 In 1972, Alice Walker, Pulitzer Prize-winning author of The Color Purple and other works, came back to her home in Milledgeville, Georgia, for a visit. She, her parents, and her seven brothers and sisters had lived in this Middle Georgia town for about a year. Walker was born in nearby Eatonton and grew up there, minus the year in Milledgeville.

The Walker home in Milledgeville was just a short distance away from Andalusia, a dairy farm and home to novelist and short story writer Flannery O’Connor from 1951-64.

Walker enjoyed O’Connor’s fiction and the fiction of other American writers, but was frustrated that in her literature classes, she wasn’t learning the works of the African American writers who came before her.

Walker and her mother went by the site of their former home to find it rotting away. At Andalusia, Walker found O’Connor’s family home to be very much intact. Though vacant, a caretaker lived on the property. Walker described the experience in her essay, “Beyond the Peacock: The Reconstruction of Flannery O’Connor.” She wrote:

“My bitterness comes from a deeper source than my knowledge of the difference, historically, race has made in the lives of white and black artists. The fact that in Mississippi no one even remembers where Richard Wright lived, while Faulkner’s house is maintained by a black caretaker is painful, but not unbearable. What comes close to being unbearable is that I know how damaging to my own psyche such injustice is. In an unjust society the soul of the sensitive person is in danger of deformity from just such weights as this. For a long time I will feel Faulkner’s house, O’Connor’s house, crushing me. To fight back will require a certain amount of energy, energy better used doing something else.”

On a recent trip through Middle Georgia, I also tried to find Walker’s stomping ground. Eatonton’s Chamber of Commerce web site offers up an Alice Walker Driving Tour, with all stops being on Wards Chapel Road a few miles out from town.

The first stop was Wards Chapel A.M.E. Church, where Walker attended with her family and was baptized. Before I pulled up, I was envisioning it to be a nearly exact replica of the church in movie version of The Color Purple. Instead, I found a building in sad dilapidation, but with a sign out front announcing efforts to restore it. 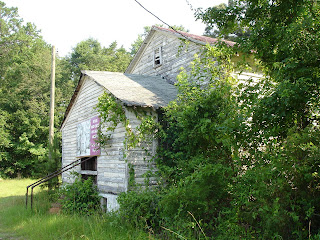 Down the road were the sites of two homes, one where Walker was born and one where she grew up. Where she grew up had a structure that looked like a picnic shelter and gold panning set up than it did the home of a family of sharecroppers. No sign marked what it really is. 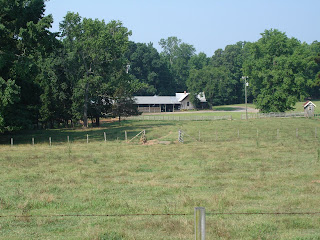 No house stood on the lot where she was born. 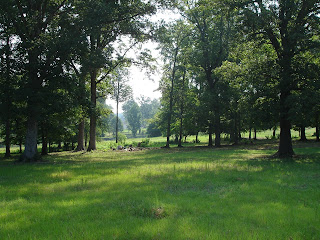 Years ago, Walker expressed anger at the disrepair of her former home, so I wonder what she thinks about her old home places now. Nearly four decades after she wrote “Beyond the Peacock,” signs mark the important places in her early life, but the same holds true for the buildings as during her visit in 1972. Unfortunately, the more things change, the more they stay the same.
If you’d like to contribute to the restoration of Wards Chapel A.M.E. Church, call 706-473-1781.
Posted by Betsy at 4:15 PM No comments: 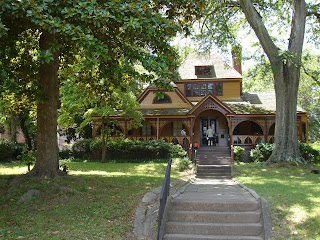 The name Joel Chandler Harris may not be as familiar to some as the characters he immortalized. For over a century, Brer Fox, Brer Rabbit, Brer Bear and the Tar Baby have played tricks on each other, visited the Laughing Place and generally cut up and carried on as told by Uncle Remus. The stories appeared in newspapers, storybooks, a Disney film and in oral tradition. Though the stories about this cast of characters originated on Southern plantations and were the stories slaves told their children, Harris, then an associate editor at the Atlanta Constitution, began writing the stories down and publishing them.

The Uncle Remus tales are considered by some to be outdated and politically incorrect by today’s cultural standards, but all that aside, the stories are just plain entertaining.

The Harris home, nicknamed The Wren’s Nest, is located in Southwest Atlanta’s West End neighborhood. It is Atlanta’s oldest house museum. The furniture in the home was used by Harris, his wife, and their six children. On a tour of the house, visitors learn all about the family and their time at The Wren’s Nest and Harris’ writing career.

The house is open for tours Tuesday through Saturday from 10 a.m. to 2:30 p.m. If you can, try to make your visit coincide with Saturday’s storytelling, which begins at 1 p.m.

For more information on Harris, the Uncle Remus tales and The Wren’s Nest, visit www.wrensnestonline.com.

Paul Green and "The Lost Colony" 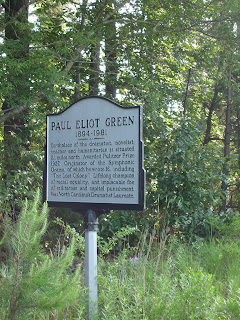 Paul Green (1894-1981) grew up in Harnett County, N.C., and spent much of his adult life split between it and Chapel Hill, N.C. This playwright and teacher won the Pulitzer Prize in 1927 for his play, In Abraham’s Bosom. Green attended Buies Creek Academy, now Campbell University, before studying at the University of North Carolina at Chapel Hill.

For North Carolinians, history buffs and visitors of the Outer Banks, Green is better known for writing The Lost Colony, an outdoor drama on Roanoke Island that has been performed every summer since 1937. It is the country’s longest-running outdoor drama.

Millions of people have seen the play during its run. The home of The Lost Colony, Waterside Theatre, is located on the site where the English settled in 1587.

Nearly two years ago, a fire at the theatre destroyed the costume shop, which housed 70 years of costumes, fabric, notes and other items. Costume designers recreated over 1,000 outfits in just a few months to prepare for the 2008 season.

The 72nd production season has just started and will run nightly Monday through Saturday until August 20.
Posted by Betsy at 1:37 PM No comments:

What will you be reading this summer?
Posted by Betsy at 4:59 AM No comments: