To Read: The Most Beautiful Walk in the World by John Baxter

I recently complained about a book I picked up at Atlanta's High Museum's exhibit this summer of "Girl with a Pearl Earring (Vermeer) and other Dutch painters. I visited Paris on Peachtree: The Art of the Louvre's Tuileries Garden two weeks ago and picked up a book from the shop that I can't wait to get into, and I hope it will measure up to my expectations. (By the way, the exhibit's last days are now. It ends on January 19, so go if you're going.) Doesn't this book look wonderful? 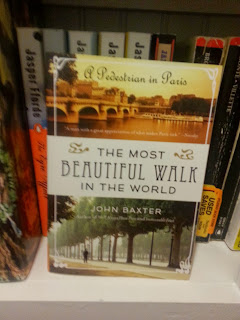 The story begins with an air of mystery: Isaac, a black man from South Africa, travels over the border into Botswana underneath a casket inside a hearse. He's dropped out beaten, broken and barely alive. A white dog notices, and once Isaac is well enough to walk, the dog, which Isaac names White Dog, follows him. To sustain himself, Isaac needs to find work in a place where he knows no one. After a long and dusty walk he comes upon a town where he meets Alice, an American white woman who hires him to tend her garden. Alice immediately trusts Isaac, even when he can't understand why, and he begins to creatively transform her outside space.

On the inside, Alice struggles with a marriage to an unfaithful husband, uncertainty in her career and a mother who wishes her to be back home in the United States. She sets off an a business trip with several colleagues, one of whom she becomes involved with, and doesn't return right away. While she is gone, Isaac is unfortunate enough to be in the wrong place at the wrong time and is deported back to South Africa and imprisoned. When Alice returns to find Isaac missing, she is determined to find him and bring him back to Botswana. While she tries to get through government red tape and other complications, a special delivery intended for Isaac arrives at Alice's and she must look after it until Isaac can be found.

I both enjoyed and struggled with this book. I loved how Morse wrote so beautifully about the setting. I could envision Botswana and Alice's home most vividly, and was reminded of how the setting of a book can become like a character, so ingrained in a book's plot and resolution. I cared immediately for Isaac's well-being. I was heartbroken when he was transported back to South Africa after such a successful tenure with Alice. It was Alice I struggled with the most. I was invested in her initially, but that began to wane when her romantic flings took center stage in the novel when it was her locating Isaac that I wanted most to see. I wanted her to be as honorable and likable a person as Isaac.

I like that even though I felt sidetracked by her business trip and subsequent romantic relationships, the importance of finding Isaac never changed for Alice. It was that part of the story that kept me quickly turning pages, wanting to know more and see a good outcome for Isaac. The ending, though abrupt and a little vague, did give me, I think, most of the satisfaction I was hoping for.


Three and a half out of five stars

If you liked White Dog Fell from the Sky, you'll like A Different Sun by Elaine Neil Orr, State of Wonder by Ann Patchett and The Poisonwood Bible by Barbara Kingsolver, and anything by Willa Cather.
Posted by betsy at 2:36 PM No comments:

For Christmas my best friend's children gave me a wonderful surprise: 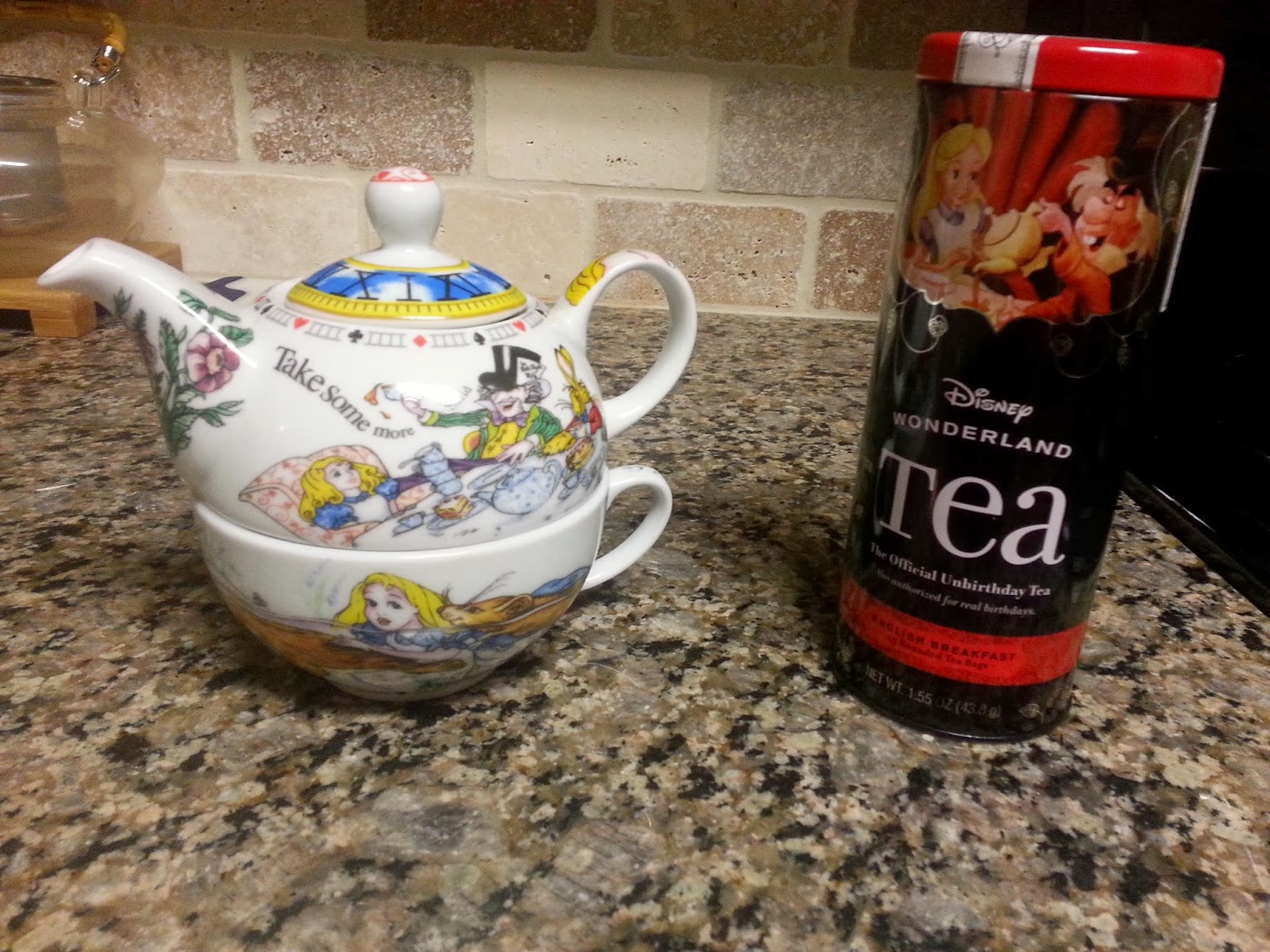 They found the tea during a recent trip to Disney World and found the teapot and cup online. I absolutely love them. This, the 2013 Scarlett O'Hara ornament from Hallmark, a gift card to purchase books and a book by a distant cousin of mine published posthumously by his wife (I'll blog about it later) were my literary Christmas gifts this year.

What were yours?
Posted by betsy at 10:30 PM No comments:

Here's my setup for last week's season premiere of Downton Abbey. Who's watching and what do you think about the season so far? 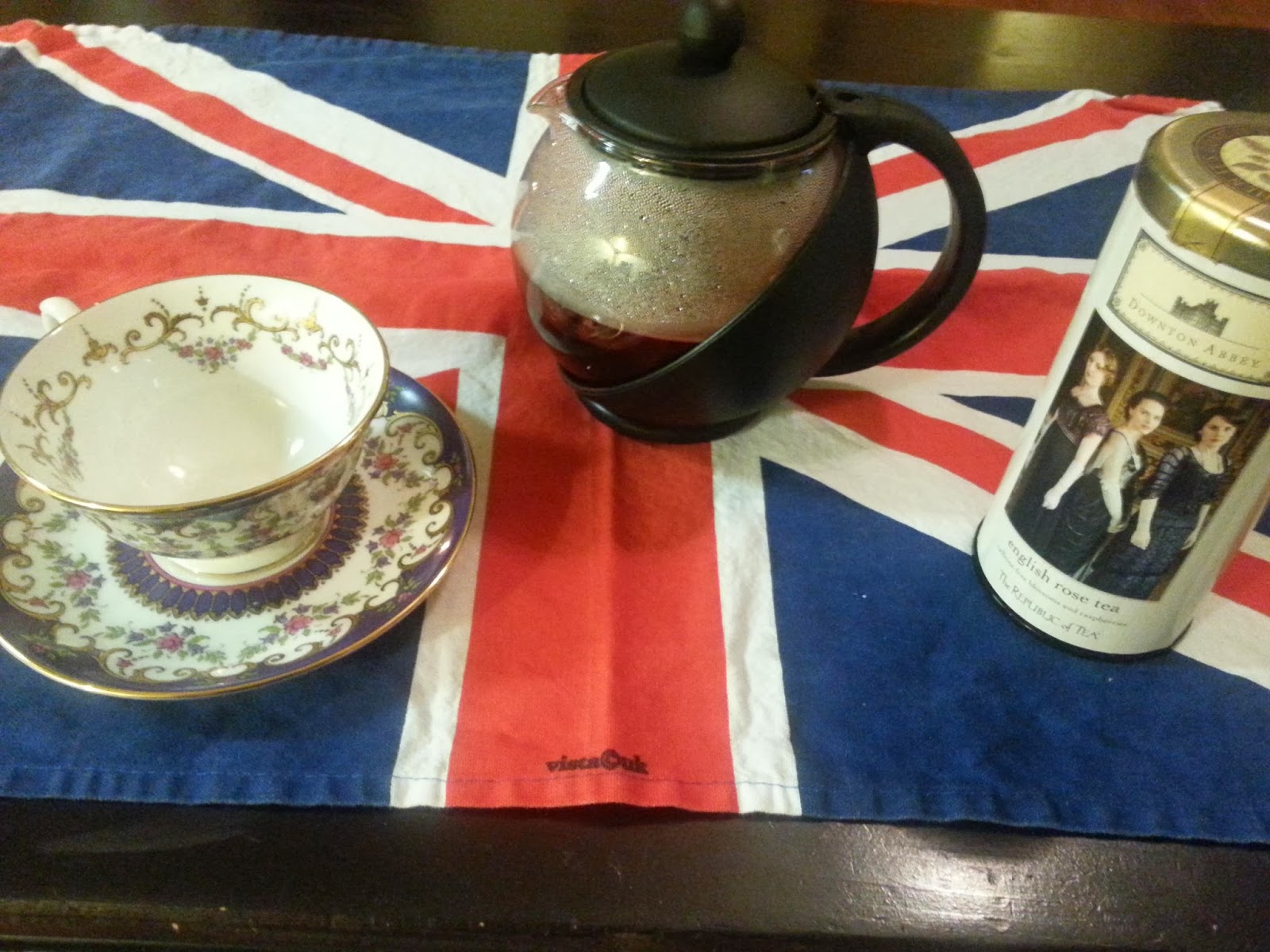 I love Downton Abbey. I've always been a sucker for most anything on PBS but Downton just takes it to a whole new level. Even my parents have gotten in on the fun. While I was home for Christmas I joined them in rewatching several season three episodes so everyone's up to snuff for the big premiere tonight of season four.

Luckily, a friend loaned me just the right book to read this week leading up to the new season: While We Were Watching Downton Abbey by Wendy Wax. The book takes place in an apartment building in Midtown Atlanta and follows three female neighbors, all from different walks of life, who come together over Sunday night episodes of Downton arranged by their building's concierge. Besides just Downton, the women share each other's joys and secrets, struggles and plenty of wine.

It's chick lit and it's good. The unnecessary stuff is kept to a minimum so readers can focus on getting to know Samantha, Claire and Brooke, their concierge Edward, and all the other characters that make for a good story. I like that it's primarily about friendship rather than romantic pursuits or career aspirations (though both factor in in places). Really, it's just a fun read, and made more fun because I read it this week.
Posted by betsy at 3:35 PM No comments:

Have you ever had really high hopes for a book and are so disappointed when that book doesn't meet your expectations? It happens.

This summer I went to Atlanta's High Museum's exhibit, "Girl with a Pearl Earring: Dutch Paintings from the Mauritshaus." It featured 35 paintings by Dutch artists of centuries past including Vermeer and Rembrandt. I enjoyed it. I loved the beautiful colors and the simple lives portrayed in many of the works. Then, the last painting of the exhibit was "Girl with a Pearl Earring," and seeing it in person was fantastic.

Years ago I read Girl with a Pearl Earring by Tracy Chevalier and saw the movie. It's the kind of historical fiction I just love.

Then shortly before I visited the High this summer I read the New York Times story, "Report of Nazi-Looted Trove Puts Art World in an Uproar" and was fascinated. This summer in Austria and Germany my family and I learned about the treasures Adolf Hitler and his cronies stored up during the Third Reich.

After that news story I was ready to read The Forger's Spell: A True Story of Vermeer, Nazis, and the Greatest Art Hoax of the Twentieth Century by Edward Dolnick, a book I'd bought at the exhibit this summer. I was excited about reading it on my Thanksgiving break. I didn't finish it until the day after Christmas (yes, it's completely unheard of for it to take me a month to read a book). Part of the reason is because I had a busy work life wrapping up 2013. The other reason it because I just plodded through it. It didn't hold my interest and was really a disappointment considering how I'd worked it up beforehand.

The book focused nearly entirely on the forger, Han van Meegeren, a Dutch painter who found he could make more money forging the work of the famous Dutch painters of the previous centuries than selling his own original works. Long story short, the book focused way too much, for my taste, on the specifics of how van Meegeren pulled one over on the art world and not nearly enough time talking about the Nazi party officials and their desire to get their hands on the artistic and cultural works of the countries they occupied, and how he was finally found out. Admittedly, I don't have much of a background in art but I do enjoy it. I also enjoy a good story that's told well. If it's historical nonfiction it needs to keep my interest and unfortunately this just didn't measure up.
Posted by betsy at 9:16 AM No comments: